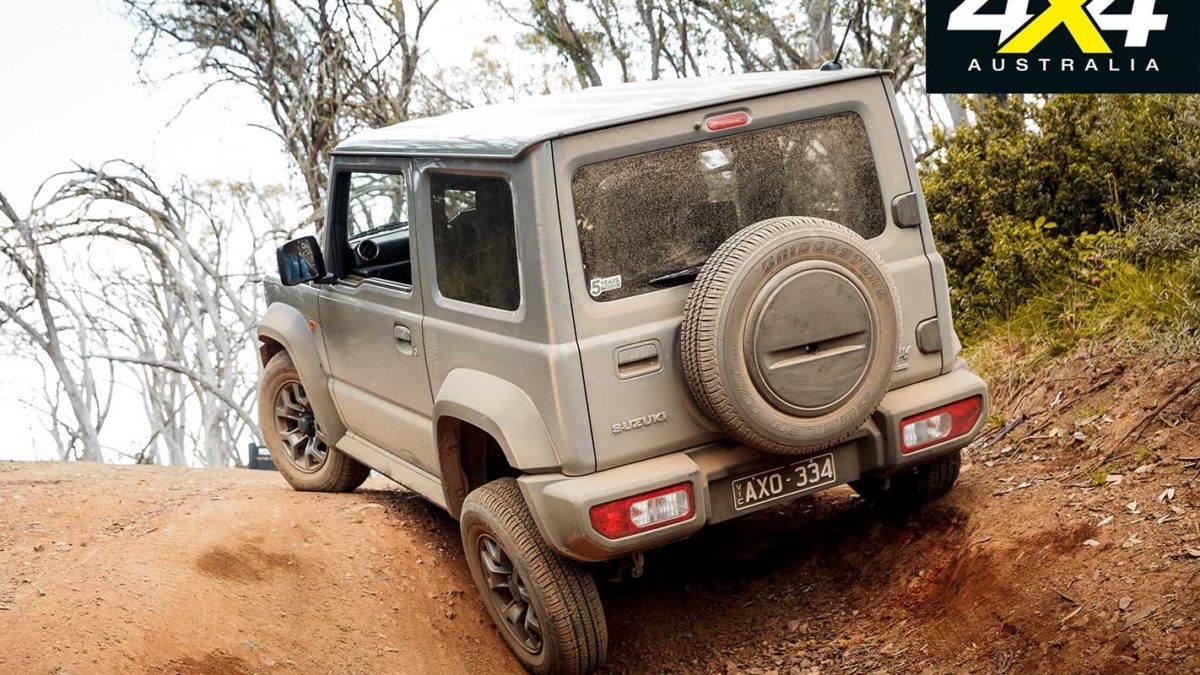 Suzuki’s new Jimny is certainly winning popularity contests in 2019, but how does the 2019 Suzuki Jimny  go off-road? We take it to the High Country to find out.

AMONG AN ocean of same-same compact SUVs with little or no appeal or individuality and even less off-road ability, Suzuki’s venerable Jimny is a welcome addition. Putting function to the fore but with boxy styling that wins on the cool and cute scales, the Jimny has no real competition in its class.

As a three-door small 4×4, the closest vehicles you will get to the Jimny are the short wheelbase Jeep Wrangler or the no-longer-in-production Land Rover Defender 90, but even those are bigger vehicles.

Suzuki’s small 4×4 harks back to the original LJ10 released in 1970, and the 2019 iteration of that vehicle retains many of the hallmarks that made the original such a success. Most importantly, it’s a no-frills, lightweight vehicle, constructed on a ladder-frame chassis with live axles at both the front and rear for better off-road performance and durability.

However, it’s now 2019, and the new 2019 Suzuki Jimny 4×4 – now called the Jimny after progressing though LJ10, LJ20, LJ50, LJ80, Sierra and Stockman models – has to meet the extra demands and regulations of the modern era. The Jimny can’t match the roughly 600kg weight of its ancestors, but, at 1095kg for the manual version, it’s still the lightest true 4×4 you can buy.

The original soft-top Suzuki 4×4 was even more diminutive than the Jimny, and the closest thing they had to any form of safety was seat belts … if you were lucky. The modern Jimny features ABS brakes, autonomous emergency braking (AEB), electronic traction and stability control, and front, side and curtain airbags. Even so, it only scored a three-star ANCAP safety rating because it misses out on things like pedestrian and cyclist avoidance.

The small, lightweight construction of the vehicle also exhibited less than acceptable structural deformation in crash testing. These negatives will do little to reduce the appeal of the Jimny to buyers who love the cute look of it, while enthusiasts appreciate the fact it’s a solid base on which to create a great, affordable off-roader.

The 2019 Suzuki Jimny is only available in one specification, with a selection of colours and with either a five-speed manual or four-speed automatic transmission. We chose the $23,990 (+ORC) manual Jimny – the auto is $25,990 (+ORC) – and set out to see just how well it goes off-road in standard trim with a trip up some of our favourite High Country tracks.

WITH ITS small size and low weight the Jimny doesn’t need a big, powerful engine to get it going. The only engine offered in Australia is a 1.5-litre, petrol-fuelled four-cylinder, which makes just 75kW and 130Nm. While that doesn’t sound like much, it’s enough to comfortably get the one-tonne Jimny up to highway speeds.

Ratios in the five-speed manual are ideal as they’re close and low for moderate acceleration and great off-road drivability. They fall short on the highway, where a taller overdrive gear is needed to drop the revs down.

As it stands fifth gear is one-to-one with no overdrive and has the engine spinning at 3000rpm at 100km/h, making it buzzy and noisy – an overdrive sixth gear would be a godsend for regular highway driving.

The 4×4 system is a traditional part-time set-up offering 2WD (rear), locked 4×4 high range and locked 4×4 low range, all via a good, old shift lever mounted to the floor. No messing around with buttons or dials to use this transfer case; it’s a direct and simple lever action. Even the convoluted rubber boot around the gear shifter is gloriously retro in its look and feel.

The low range crawl ratio of 36:23:1 is more than enough to amplify those 75 buzzing kilowatts to propel the Jimny up steep mountain climbs and provide controlled descents. There are no diff locks as standard, but the Suzi didn’t struggle for traction on the dry, rocky tracks when wearing cookie-cutter 195/80-15 highway tyres.

WITH ITS short wheelbase, relatively tall ride height, 80-aspect tyres and live axles you could be excused for thinking the Jimny would be a nightmare on the road, but that’s not the case. The coil-sprung three-link suspension is soft, providing a comfortable ride without the fore-to-aft pitching you might expect of it.

It’s no corner-carving sports car and the dampeners struggle to control the wallowing if you try to push it hard through corners; they also thump hard over familiar suburban speed bumps that many compact crossovers float over, which was concerning before we hit the rough off-road tracks.

THOSE concerns were warranted, as the Jimny hammered and slammed up a rocky track that we know from experience – in bigger cars with bigger tyres – isn’t all that tough. The small tyres fell into holes and climbed over rocks that a modest 285 rolls over, and the suspension thumped and bumped more than it should. A slower approach meant the Jimny did them with ease; although, a quality suspension upgrade with some larger tyres would transform the Zook’s off-road performance.

The low gearing of the Jimny’s manual box was ideal for climbing and descending steep hills, and the traction control was more than up to any challenge. Likewise, clearance was never an issue, with the short wheelbase keeping the Jimny’s belly high; while stubby overhangs offered protection fore and aft.

A tight turning circle, compact dimensions and great visibility from the deep windows all contribute to making the Suzi easy to manoeuvre on the tracks.

THE 2019 Suzuki Jimny is a veritable ‘Tardis’. Approaching it from the outside it looks tiny – it’s one of the only 4x4s where I can wash the entire roof without having to step up on anything – and its compact size only takes up half a parking space.

However, the door openings are big, so you don’t need to be a contortionist to get in and out, and there’s plenty of space in the front seats and the Jimny has more headroom than any of the popular one-tonne 4×4 utes.

Sure, if both driver and passenger attempt to put on their seat belts at the same time they are bound to touch hands, but there’s still ample space. There’s not a lot of substance to the front seats and they lack any lateral support for big blokes; they’re comfortable enough for short trips, but they were testing by the end of a long day.

Rear-seat passengers aren’t as well accommodated, as it’s a squeeze to get past the front seats and there’s just enough space for small kids – we doubt many buyers would be choosing a Jimny for family transport. Doing away with the 50:50 split would create more cargo space, which is lacking when the rear seats are upright.

With the rear seat folded flat the luggage space is usable; enough for a 40-litre fridge, a swag and a small bag for a weekend of camping, but not much more. Do away with the rear seat and fit a solid cargo barrier behind the front seats and that space becomes a lot more usable.

The cockpit has climate-control air-conditioning; powered door locks, windows and mirrors; a large(ish) colour screen for the standard sat-nav; Bluetooth and audio systems; and a tiny console with two cup holders.

Unfortunately the screen takes on a trippy look when viewed through polarised glasses, and the sound system comes with two front speakers only – a better quality sound system would be appreciated in such a funky looking car that is sure to appeal to younger buyers; even for old blokes like me. The gauge cluster has a cool, retro look, but the cover over the main gauges can be hard to read at times due to the reflection, and there’s no digital speedometer readout.

THE 2019 Suzuki Jimny isn’t going to be everyone’s choice for a long-distance touring vehicle, and you can forget about it if you’re after a family car or want to tow a large trailer. Taken at face value, though, and there’s plenty you can do with the little Suzi.

It’s a sweet city runabout and perfect for a couple on a weekend getaway, particularly if you make the most of that rear seat/cargo area. It’s rated to tow a 1300kg braked trailer; although, that’s more than 1.2 times the weight of the car.

The 40-litre fuel tank might sound tiny by 4×4 standards but this is a pretty economical car. We got 8.74L/100km during our week of testing, which included a day in low range, highway driving and city commuting. The tiny tank should be good for a range of around 400km.

Suzuki Australia realises the Jimny will be an enthusiasts’ car and that enthusiasts will want to accessorise them, so it’s offering a range of factory accessories such as metal diff guards, luggage tie-down hooks and roof racks.

More significantly, Suzuki worked with ARB to develop a range of gear and kitted up its own ‘JBOX’ Jimny with a heap of cool-looking gear including the improved suspension and bigger tyres we reckon it needs. Other 4×4 aftermarket companies are working feverishly on their own range of gear for the Jimny, so there will be no shortage of kit to equip for your needs.